Below are the updates of China’s clean energy and power sector during last week, with these highlights:

Have a Great Week Ahead

This is Energy Iceberg’s “China News Syndicate”–a weekly updates of major news about Chinese clean energy market. As a subscriber to Energy Iceberg, you will receive the “Syndicate” besides our weekly analytical article.We curated the following updates and commentaries upon screening +300 local, diversified, and insightful sources that we trust. Make sure to reply to let us know how you think.

With growth at its slowest in nearly three decades, China’s leaders seem eager to strike a balance between protecting an already-slowing economy and stamping out an epidemic that has killed more than 1,000 people and infected more than 40,000. After reviewing reports on the outbreak from the National Development and Reform Commission (NDRC) and other economic departments, Xi told local officials during a Feb 3 meeting of the Politburo’s Standing Committee that some of the actions taken to contain the virus are harming the economy, said two people familiar with the meeting, who declined to be named because of the sensitivity of the matter.

Coronavirus on Energy: Provinces and Cities Have Introduced Electricity Price Discount and “Weavering” Policy in Attempt to Save SMEs

Energy Iceberg Note: these measures are good news to the SMEs but not so much to power projects or the grids. As we mentioned in our analysis, Chinese government will utilize energy-cost-reduction measures to boost economy revival during and after the coronavirus outbreak. Local governments may seek further lower power tariff, and it is more difficult now for the local governments to support renewable subsidy.

Goldwind, Envision, and MYSE Further Cement Their Top 3 Positions in 2019 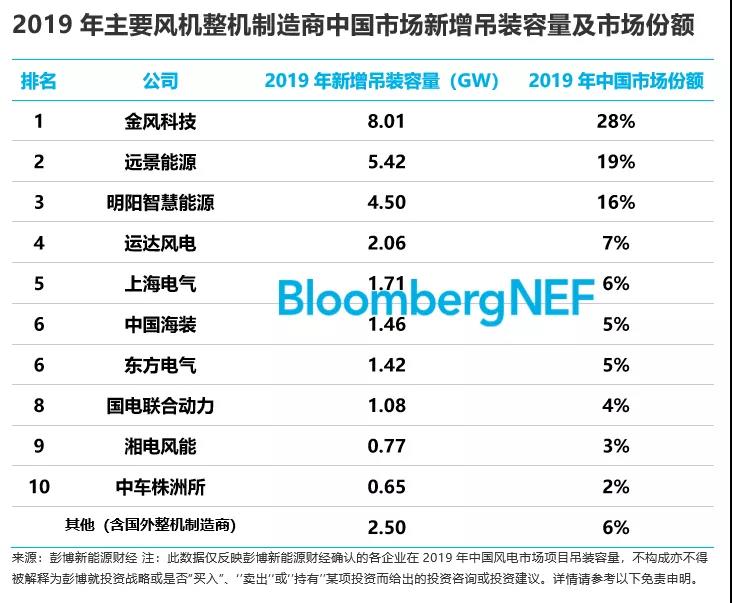 So far the northern coastal province has yet to install any turbine in the sea, but last year it kicked off the first 300MW project–CTG’s Laizhou Bay demo that will test the hybrid development of aquaculture and offshore wind. (Basically, the turbine foundation will serve as the artificial reef. )

Energy Iceberg Note: In total 2.1GW and six projects are in the preparational stage now. It is an emerging area within China with potential opportunity.

Energy Iceberg Note: Huadong Engineering Corporation Limited is one of the key offshore wind installation company in China. Please refer to our previous article for more information. This article of us introduced electricity engineering firms and “Huadong Institute”: https://energyiceberg.com/china-offshore-wind-engineering/

Energy Iceberg Note: Huaneng Renewable is Huaneng’s wind and solar power business unit. The privatization is mostly due to a perceived difference of Chinese companies’ valuation between the Chinese stock market (Shanghai, Shenzhen) and that of Hong Kong, or A and H shares, respectively. Prior to the privatization of Huaneng, State Power Investment Corp and Dongfang Electric’s subsidiaries have also kicked off privatization procedures. The market expects more Chinese renewable companies to return to A-share. China General Nuclear Renewables (formerly Meiya Power) may sort to delisting from the H-share or will seek to be traded in both markets.

It is not official yet, but National Development & Reform Commission (NDRC) has revealed to several major solar power firms its decision to cut the directory prices (the price ceiling tags) for solar photovoltaic. The price tag cut has been highly anticipated, but the reduction– much as 18%– is higher than expected. The new directory price ceilings for zone 1, 2 and 3 projects would be lower to ¥0.33, ¥0.38, and ¥0.47 per kWh. Meanwhile, a fixed subsidy for industrial and commercial distributed solar projects are set at “not higher than ¥0.05/kWh.” The regulator has not decided on the rate for residential solar.

The project would be built in four phases in which the first and second phases would cost around ¥4 bn ($573 mn) each to expand solar cell capacity by 7.5GW, up from 20GW currently. The first phase of the 7.5GW solar cell project would be started before March 2020 and is expected to be completed during 2021.

Canadian Solar announced it has secured Brazilian reais 225.2 mn (US$ 55 million) non-recourse project financing from Banco do Nordeste do Brasil S.A. (BNB) for its Lavras solar power projects Since the beginning of 2019, Canadian Solar has secured BRL 1,007 million (US$ 247 million) solar project financing with BNB. The 152.4 MWp Lavras project will be funded over 21 years across the construction and operation phases of the projects. The inflation-linked debt tied to the National Consumer Price Index (IPCA) will provide improved capital and resource alignment with the Brazilian economy.

China’s largest automotive lithium-ion battery maker CATL reported having resumed production. The firm’s manufacturing base, at Ningde of Fujian, has more than 80% of employees as migrant workers from foreign provinces, but some were staying in the plant during the Chinese’s New Year. On Feb.10, CATL’s market value reached ¥364.9 bn, 80% up compared to that two months ago.

Cumulative Installed Capacity of China’s Electrochemical Storage Market is Projected at 2833.7MW by the End of 2020 — mp.weixin.qq.com

Car Market Especially Hit by Outbreak: EV Producer BYD’s EV Sales in Steady Decline in the Past 7 Months, with a Sharp -75% Decline in Jan.

Energy Iceberg Note: Beijing’s decision to cut the national subsidy for EVs is a key factor. But recently MIIT hints that the regulator may be changing its mind and will carry out the subsidy cut slower than previously expected.

83% of the Electricity Power Companies Have Resumed Work

He mentioned that 97% of petroleum and petrochemicals companies had gotten back to work, and 83% power generation and transmission companies have restarted. He also said, “there is no potential issue” of energy supply in the nation.

Energy Iceberg Note: In the same week, two thermal power plants disclosed two cases of coronavirus infections. And such cases led to immediate suspension of the plant for 14 days for quarantine purpose. Although Beijing pushes for production resumption, the industry is highly concerned about the risk of outbreaks.