Winter has fallen upon the Chinese renewable industry, especially on the solar industry, as Beijing’s 531 policy put a brake on the heated domestic solar market. But EU is easing control over China’s solar export to the continent, providing breathing chance for small players.

The “season changes” in Chinese renewable industry always comes in a similar fashion. A policy-driven spring leads to an overheated market themed with overcapacity. And then a winter hits unexpected, as the regulator quickly change the policy, taking back the amicable conditions.

But only a few months later, the joyful solar sector was slapped by Beijing’s new policy, at 31 May, to halt all large-scale PV new approvals “until further notice.” The halt caught the everyone in surprise—Beijing often took subsidy cut as policy tools to regulate the energy market, but never before it halts projects just like this.

The “531 police” also announced to cut feed-in tariffs for solar projects of 0.05CNY/Kilowatt hour, paving the way to achieve Beijing’s target of zero-subsidy solar by 2020.

Behind the policy is Beijing’s bleeding bank account—Renewable Development Fund— to subsidize renewable power. By 2017 the fund has a cumulative deficit of over 100 Billion yuan, which could rise to 269.4 Billion without intervention.

The signature of China’s Ministry of Finance in the policy marks the real motivation behind the policy setup, which is to solve the deficit in solar and wind sectors.

Solar, is a bigger target.

The Chinese solar market is left with only 11 GW market space after the policy for new build in 2018, compared to around 35GW installation last H2.

That means all would struggle to fight for the shrinking market and a chance to survive. Some, inevitably, would lose.

The result in 2018H1 fillings of Chinese solar firms is well foreseen.

GLC-poly, Panda Green Energy, Kong Sun, SFCE and others all registered reduced gross margin. SFCE faces a 252.33% sharp decline in profitability, showcasing the market reality that smaller players are in the worse positions.

Some, however, has yet to feel the pain. Those who have a robust overseas market appears to be doing just fine.

GLC integrated system, for instance, is proud of its $2 billion revenue, half of which comes from abroad. Its overseas sales doubles in 2018H1 compared to 2017H2.

Back to 2013, Chinese solar makers faced its first winter, following the anti-dumping measures in EU market. And they survive with Beijing’s offer of a better solar market policy.

And now, the table has turned. To survive, Chinese players would need to seek growth overseas. 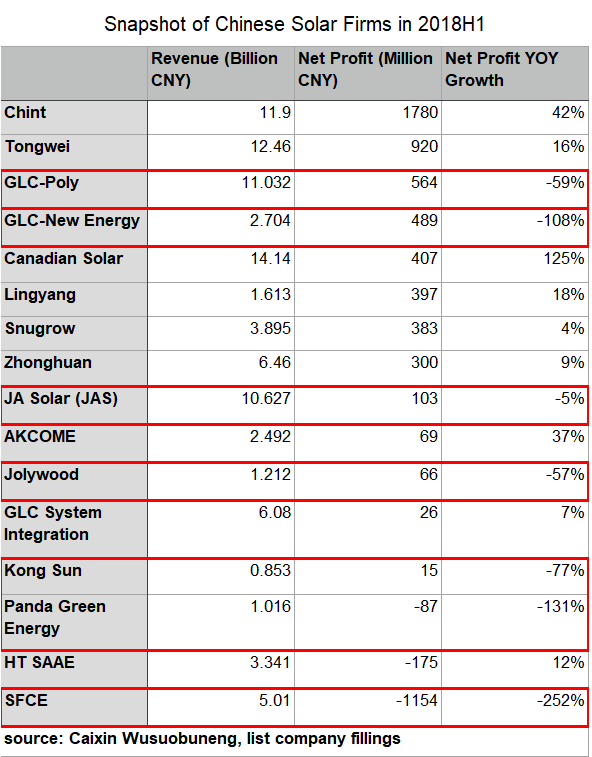 The recent end of EU’s anti-dumping measures occurs just in time, offering the potential of salvation for small players.

EU first introduced the anti-dumping and anti-subsidy measures at 2013 and then it extended 18 months the expiry date of the policy in 2017. But, according to Reuters’ report,  the EU Commission seems to have dismissed the request for an “expiry review,” meaning the end of the “double-anti” measures and the Minimal Import Price (MIP) upon Chinese exports.

But EU lifting the trade restriction may be merely an act reflecting the market reality, in which the large Chinese solar producers had bypassed the restriction by setting up overseas manufacturing facilities.

In 2018H1, China local factories sold 1.56GW solar panels to EU, of total value at $610 Million. But the PV products in the EU market that are made by “Chinese firms” is expected to far exceed that number and consists of over 80% of the total EU solar market.

Chinese firms have set up production capacity abroad over the past decade since 2010 Suntech set up a factory in Arizona.

The example was followed by Canadian Solar, CSun, JA Solar and others after the MIP came to light in 2013.

More and more Chinese solar firms chose to export to EU by these facilities, instead of exerting the minimal price. By 2016, very few Chinese solar producers remain in the MIP scheme.

The lifting of MIP, therefore, would not mean significant changes to the big fishes, what it would help are the smaller solar players to seek market growth during the winter in Chinese domestic market.

Either way, global solar prices are likely to continue to decline. BNEF already estimated that, since “531”, PV panel price globally could drop 34% to $2.44cent per watt.

If true, Chinese solar is likely to achieve grid parity in a year. The energy transition—this time with price competitiveness—is happening.