The top authority’s push to achieve an emission peak by 2030 has given new momentum to the Chinese renewable and new energy next-stage development, as a rare statement last week from China’s vice premier Han Zheng indicates.

The Energy Iceberg team is back to bring you the latest updates on the Chinese clean energy industry. Some other highlighted updates of the market from last week:

Beijing’s top-level Energy & Emission Intensive Curbing Tele Meeting was held last week, where Han Zheng, the Vice-Premier of China, has attended. In the meeting, Han stressed the urgency to resolutely curb the “blind development” of high-energy consumption and heavy-emission projects. New projects failing to meet the energy-efficient and emission requirements should not be approved.

Two months ago, the Ministry of Ecology and Environment (MEE) promulgated the guiding opinions on the prevention and control of the ecological environment toward construction projects with high energy consumption and high emission. The guiding opinion mention that new construction, reconstruction, and expansion of projects with high energy consumption and heavy carbon emissions must meet the peak carbon emission target. Carbon emission impact assessment would also be included in the environmental impact assessment system.

Energy Iceberg’s Note:  emission capping is not the top political issue in China.

In the recent Politburo meeting of the CPC Central Committee, the top authority emphasized the necessity of puttng a major effort to secure the 2030 carbon peaking target. The recent priorities include setting up a 2030 Dual Carbon roadmap execution plan and to “steadily curb energy & emission intensive capacity expansion.”

The Energy Bureau of Inner Mongolia Autonomous Region recently nominated seven demonstration hydrogen projects based on wind and solar power in the cities of Ordos (5 projects) and Baotou (2 projects).

The projects will have the capacity to produce 66,900 t/yr of hydrogen from water, as well as an installed capacity of 369.5MW of wind and 1,85 GW of solar power.

The wind and solar projects built in the demonstration projects are market-oriented grid-connected projects, and the electricity purchased by the grid company does not exceed 20% of the total new energy generation capacity of the project.

The wind and solar projects and the hydrogen production projects are required to start production simultaneously.

DNV, the independent energy expert and assurance provider, has issued a Statement of Feasibility to MingYang’s 16 MW offshore wind turbine MySE16.0-242. DNV’s Statement of Feasibility is based on a complete plausibility check of the conceptual design loads, the control and safety concepts as well as the conceptual design of the rotor blade, the safety system, the main machinery components, the electrical installations.

Energy Iceberg: the design is the world’s largest offshore wind turbine concept so far. The timeline (the end of next year) of producing the prototype is very ambitious.

China’s Beijing-Tianjin-Hebei, Shanghai, and Guangdong provinces were approved as the first batch of the national fuel cell vehicle (FCV) demonstration city alliances, according to the Beijing Municipal Finance Bureau.

The approval is confirmed, so far, mainly by the Beijing local government.

Zibo City, of Shandong province, also cross-referenced the result. The city–where fuel cell company Dongyue Future Hydrogen is located– is the only city that collaborates with all of the three city alliances. The city’s position is likely due to Dongyue as well.

Although the five ministries have not yet released an official announcement of the result, the industry has been concluding the finalists based on recent dealmaking among these cities. The three approved city alliances are:

Energy Iceberg: Hebei and Henan alliances do not seem to pass the final round review yet. These three alliances are likely the only winner of the national funding program. It seems doubtful that there would be more alliances to be approved within the next 2-3 years.

Liao Kuo, general manager of China Machinery Engineering Corporation (CMEC), announced at the China-Arabic Energy Cooperation Summit Forum that a subsidiary of CMEC will develop the first ammonia production project based on green hydrogen. Products of the project (“Green ammonia”) would be exported to the international market.

Currently, the development of relatively mature ports and routes provides a good logistics basis for the trade of green ammonia, the GM said. Due to the development potential of green ammonia as a fuel and chemical raw material, green ammonia projects are currently being actively developed at home and abroad, most of which are small-scale pilot projects, with an estimated production capacity of 20,000 to 60,000 tons/year. Most projects are located in Australia.

As of August 23, 2021, the number of patent applications in the fuel cell field in China (excluding Hong Kong, Macao and Taiwan) reached 59,362, of which:

The rest applicants are from the United States, Japan and South Korea. Toyota ranks first with 2,955 patent applications. 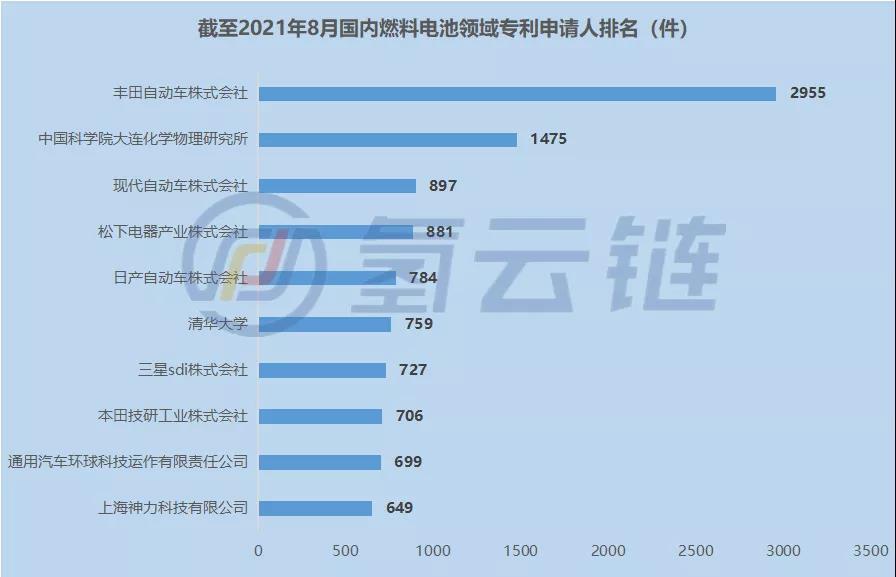 MIIT, MoST, MEE, Ministry of Commerce (MoC), and the State Administration of Market Supervision and Administration (SAMSA) jointly published a new policy about tiered battery utilization for NEVs.

MIIT recently issued a reply to the proposal made by Gao Yaguang, a member of the National Committee of the Chinese People’s Political Consultative Conference and Vice Mayor of Wuxi City, Jiangsu Province.