It is interesting to put figures in comparison to get perspectives. So in the coming articles, I hope to summarize the key information about the East Asia power supply structure from a global perspective.

The data comes from the most recent BP Statistical Review published in July and information from the World Bank as well as EIA.

Unsurprisingly, China is the biggest power producer around the world, and power demand resumed robust growth. By 2017, the total installed capacity in China is 6495.1 TWh, up 6.7% compared to 2016—one of the highest growth rates globally.

Last year, power consumption declined in the US. Japan and Korea both registered around 2-point growth.

Power Per Capita – The Key 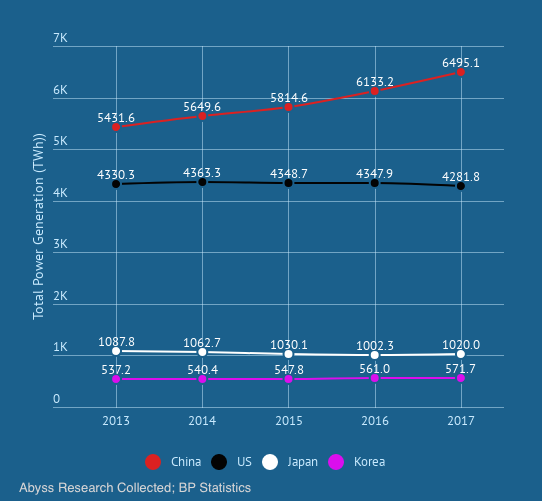 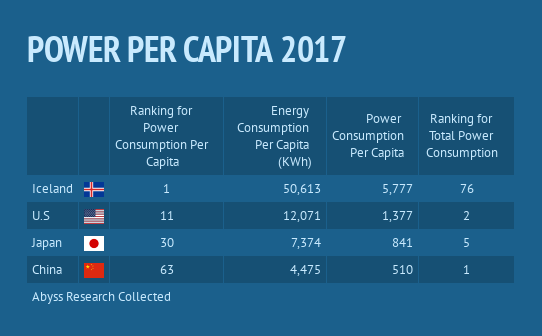 Despite the Chinese power industry looks gigantic—Chinese power production last year accounted more than a quarter of the world’s total generation, the generation adjusted by the population is less impressive.

The power per capita ranking is perhaps a better clue of the development stage of a country’s power supply. Nordic countries rank the highest, with Iceland taking first place. The U.S sat at 11th, while Japan ranked 30th.

Compared to most OECD countries, China is far from a “strong” power player in this ranking. It also reflects that China would continue to seek to enlarge its power supply in the coming decades if the economic development momentum remains. 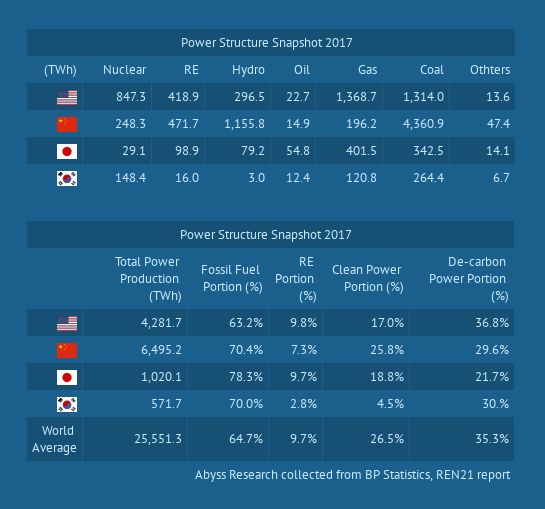 In comparing these countries with their different power supply structure last year, there are also some interesting find-outs as well.

If we compare the fossil fuel (coal/oil/gas) generation to the clean (RE, Hydro, Nuclear, and others) power portfolio, the US appears to have a more balanced power sector compared to the three East Asian countries. This very much thanks to its nuclear power capacity.

China was often considered a major polluter in the world, its fossil fuel power sector is just more than double of that of the clean industries. Relatively speaking, China is less “bad” in its indulgence of fossil fuel, due to a solid base of hydropower capacity as well as the booming renewable industries.

Korea did not have a large RE market yet, it heavily depends on gas (fossil fuel) generation. As the government is eager to deviate from nuclear, the dependence on fossil fuel may only increase.

For me, that means nuclear phaseout policy in East Asia is not so much good news for the de-carbonization. But that also means there are enormous potentials for the renewable market in Japan and Korea—mostly in offshore wind, solar and tidal. 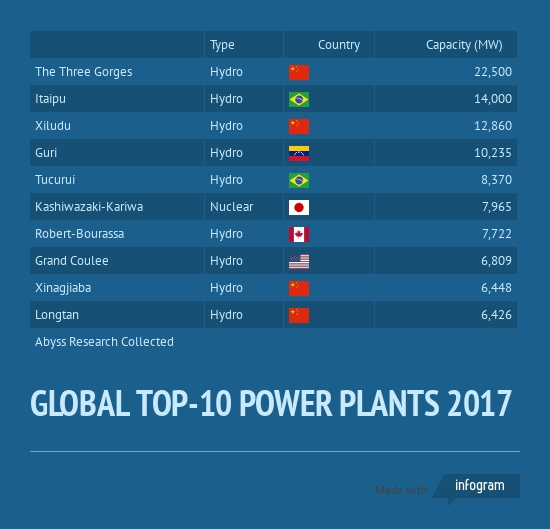 China always stands out as a country with the most conviction to invest in large infrastructure and energy facilities. Three Gorges Dam of 22,500MW still holds the crown of the biggest power plant on earth. Chinese hydropower dams took four places out of ten in world’s largest power projects.

The challenger for Three Gorges would be the 39,000 MW Grand Inga Dam to be built in DR Congo and the 87,110MW Penzhin Tidal Power Plant planned by the Russians.

The top-10 and top-20 biggest power facilities are almost all hydro, with only one nuclear plant at Top-10. This shows that hydro and nuclear, despite both highly controversial, are the standard choice as base-load generation options to replace coal.

But nuclear is not that welcomed and plan to boost nuclear is in defeat everywhere. The unit one of Kori Nuclear Power Plant, ranked 13th in 2017 top-20 power facility, has been suspended by Seoul this year.

Let’s discuss the RE sector next time. 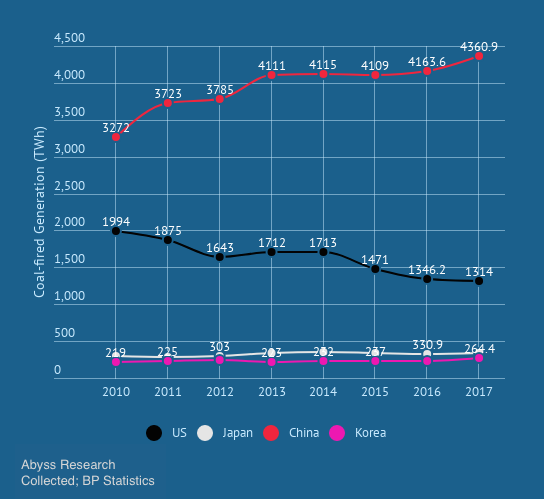 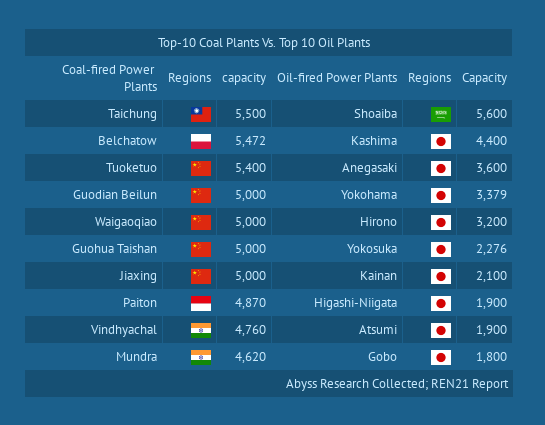